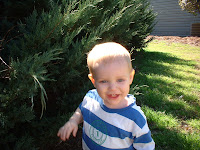 Wes Drank the Whole Thing But He's Okay Now
Recently, Grandson Wesley traveled with his aunt and uncle in the family van for a visit to their home several hours away. When he became restless, his uncle gave him a bottle of orange soda pop. ("I didn't know he had never had a whole bottle of pop before," his uncle said later.)

Wesley settled down with his orange soda pop, and for a long time, he was quiet. But then he moaned.

"Are you okay, Wesley?" his aunt turned quickly to ask.

"I don't feel good," he whimpered.

A moment later, he rubbed his stomach and began to cry. "Oh, no!" his uncle thought, expecting the worst, "I'll be cleaning this van for a week."

Then it came - a long, thunderous burp.